Find answers to some of the most commonly asked questions about switching to solar.

Find the forms you need.

Find out more about Incentives.

How much is a solar estimate?

Yuma Solar provides free in home estimates. We will meet with you to give you an honest evaluation of your home, along with providing an itemized breakdown of all costs and materials.

What size system does my house need?

When looking at the system size your home needs, we look at the last 12 months kilowatt-hour (kWh) usage, if available, and we design a system that will generate enough power to cover your usage. If you have not been in your home for a full 12 months, we look at other houses that have similar qualities and provide our best estimate of energy use. When this occurs, we always design a system that can be expanded in the future.

How can I determine what system size I need if I have my annual kWh usage?

The general rule of thumb is that for every kilowatt of solar you install on your roof, if it is southern facing, it will produce annually about 1,600 kWhs. If your roof pitches east or west it’s about 1,500 kWhs per year. So if you know your annual kWh use and the direction your roof pitches, you can divide the annual usage by either 1,500 or 1,600. For example, if your annual kWh use is 16,000 kWh, and you have a south-facing roof, you would need 10kW of solar.

How much does solar cost?

What tax credits are currently available?

There is a 26% federal tax credit, and if you are an Arizona state resident there is a $1,000 state tax credit.

How much weight does a system add to a roof?

The weight of the solar modules plus the racking adds about 2.7 lbs per sq ft to the roof.

How big are the panels and how much space is needed?

What type of roofing material can you install on?

We can install on metal, asphalt shingle, composition roll, tile, and foam. The only roof type that we will not install solar panels on is wood shake.

Can you install solar on a manufactured home?

Yes, we can install solar on a manufactured home as long as it is 1980 or newer. Anything older would depend on the construction of the roof.

How long does the process take from start to finish?

Normally we quote from 4 to 8 weeks. This timeframe includes submitting detailed drawings for a permits, APS paperwork approval, installation, meter set, and turn on.

How much money do I need to put down?

Unless you choose to, there is no down payment requirement.

What kind of warranty is offered?

Yes, we do. Our company offers leases that do not have an escalator built into the price, and that you own at the end of your lease term.

Why is Solar Important?

Did you know that coal is still being used to generate much of your electricity? APS has two coal plants (Four Corners Power Plant, near Farmington, New Mexico, and Cholla Power Plant, west of Holbrook, Arizona) and is required to file annual Toxic Release reports as part of EPA’s Community Right-To-Know program. Toxins are measured in thousands of pounds per year, some of which are released to water.

APS is supporting the adoption of clean, renewable energy sources in Arizona by offering interconnection agreements to customers (residential and commercial) who install qualified solar systems, such as photovoltaic solar systems. 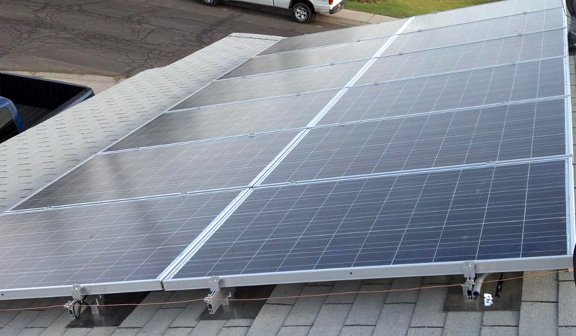 How Does It Work?

Photovoltaic devices generate electricity directly from sunlight via an electronic process that occurs naturally in certain types of material. Electrons in certain types of crystals are freed by solar energy and can be induced to travel through an electrical circuit, powering any type of electronic device or load. PV devices can be used to power small devices (e.g., road signs and calculators), homes, or even large stores or businesses. Several incentives are in place to encourage consumers to invest in renewable energy sources.

How Much Does It Cost?

Generally, the cost is roughly $3.25 per installed DC watt. One thousand watts, or 1 kW, will produce about 1600 kWh per year. So you can divide your annual kWh use by 1600 to see how many kW you will need to cover your bill.